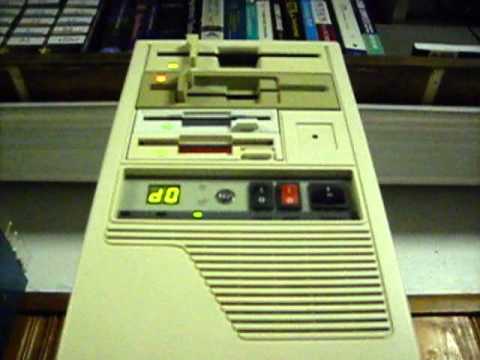 Computers have long been capable of producing rudimentary tones, but “Phantom of the Floppera” takes the concept to the next (or maybe previous) level. YouTube user FunToTheHead says he made four floppy drives perform Bach’s Toccata and Fugue in D Minor by turning them into MIDI devices playable by a pre-recorded MIDI sequence:

People have made floppy drives sing before, but this is my personal take on it. [The setup] features two 3 1/2″ drives and two 5 1/4″ drives connected to a PIC18f14k50 microcontroller. It interfaces to any MIDI source via MIDI over USB. Straight MIDI [i.e. from a keyboard] would also be possible with an additional small circuit and some minor firmware changes. This initial version can respond to all 128 MIDI notes, and pitch bends [of] plus or minus two semitones.

As it can produce only four simultaneous notes [only four? really?], and each drive has a different range and tonal characteristics, best results are obtained by arranging compositions by hand.

In these times when we can access millions of songs with the tap of a touchscreen or even write our own by doing the same, it’s becoming harder to remember a time when the best sound you were ever going to get out of a computer was the hum of its floppy disk drive. Really, it wasn’t all that long ago.

As FunToTheHead mentions, others have made floppy drives sing before, and at least one has done the same with a printer. Here’s an excerpt from a mostly-unreleased song by an unknown artist called Kid Nebulous featuring the dulcet tones of an early Apple ImageWriter: