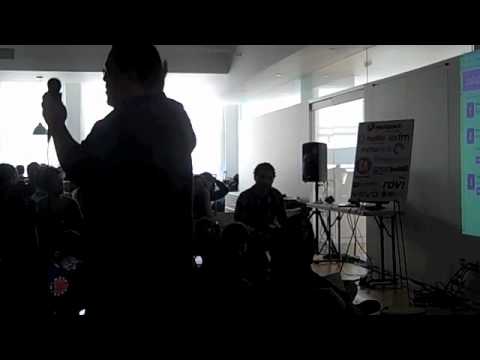 One of the many great ideas to emerge fully-formed from Music Hack Day New York, Callaboraoke automatically splits songs onto segments, inviting groups of friends by email to sing each of the lines of the song via cellphone.

Callabaraoke lets groups of friends collaborate on the same karaoke song, each one singing a separate verse, with the resulting MP3 emailed to the group. Hilarity will ensue.

The service records them doing so asynchronously (i.e. whenever they get around to it), then stitches their contributions together into one big Frankenstein creation and emails the resulting song to the group.

However, the concept makes a lot of sense, and it could easily be scaled to work with more songs. Callaboraoke works by pulling the lyric data for a given song from a MusiXmatch API, and chops up an audio file of the song based on how many people are participating and the timestamps of each lyric within the song.

Then, it uses a Twilio API to call each user so they can record their part. The lyrics on the web page updated in real time to reflect which parts of the song have been completed; when the song is done, everyone in the group can hear the resulting collaboration.