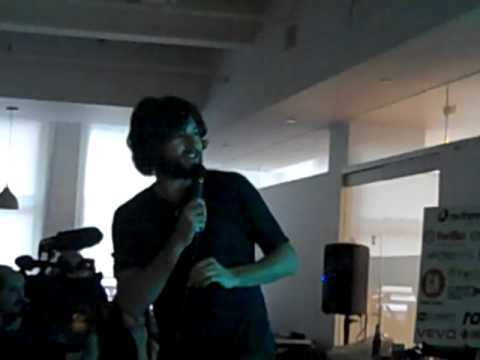 The creation of Columbia University grad students Gene Kogan, John Gallagher and Thierry Bertin-Mahieux, Beat Parade (still in development) weaves 30-second music samples, which are generally legal to play without getting a license, into one continuous beat-matched DJ set.

Yes, much as Watson has been pwning humankind on Jeopardy these days, computers are able to beat-match songs with the best of them so that tracks flow seamlessly from one to the next — thus “Beat Parade,” created by the team at last weekend’s Music Hack Day New York.

The listener needs only pick one song to kick things off, and Beat Parade takes care of the legwork from there, finding songs that match the seed song in terms of artist and acoustic similarity. It has a social aspect too: Beat Parade streams can be shared with friends. And according to the team, the service can be personalized to each user, so people may not hear the same stream even if they start with the same song.

This web app’s graphical interface is currently quite barebones — and understandably so, considering that they built this in a single 24-hour period. But the engine behind it has the potential to make the creation of relevant playlists with smooth transitions between songs relatively effortless. In addition, because it only uses 30-second samples, website owners, retailers, and others who like to integrate music into their offerings might do so with Beat Parade — especially if they’re targeting people with short attention spans.