Sure, you could labor painstakingly on photo slideshows of your friends, interlace their snapshots with images of their interests, all set to a song by Rick Astley, Vanilla Ice, or any other number of artists that instantly make a mockery of whatever their music is synched to, upload them somewhere, and send out the link to everybody.

But wouldn’t it be so much easier to enter their name and a few of their interests into the Disco Slideshow web app, pick a soundtrack, share the thing on Facebook and Twitter, and be done with it all in about a minute?

If you decide on the latter option as a way of amusing yourself and your circle of friends, we recommend picking one of your more outgoing pals — not only because they’re likely to be thicker-skinned about what’s to come, but because Disco Slideshow only works with people who share photos of themselves publicly on Facebook.

Enter a few of their interests or words that describe them, as well as one “funny” word, and then pick a song (Astley, Vanilla Ice, Sir Mix-a-Lot, Bon Jovi and a few others are represented). And just like that, you have a shareable media object with photos that switch in time with the music (with the soundtrack provided by YouTube, of course, slideshow timing courtesy of an API from Evolver.fm publisher The Echo Nest, friends’ photos and sharing features provided by Facebook and Twitter, and photos from Flickr).

The creation of Blake Jennelle and Brian Stoner at Music Hack Day New York (view their video demonstration below), Disco Slideshow is a great example of the sort of magic that can happen when powerful technologies are mixed in just the right way by a couple of people with an interesting idea.

So, who is that masked character pictured above? Which of my friends did I decide could handle having his Disco Slideshow shared with the world? Vince Averill is a tall, stand-up comedian from the Midwest, not to mention a stand-up guy with whom I used to make very strange music. I figured that since he’s already a public figure, he could take it. As for how you choose to handle that decision, that’s entirely up to you.

Here the video demonstration of Disco Slideshow that we shot at Music Hack Day last week: 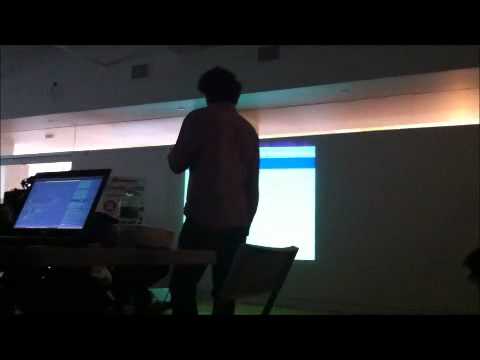