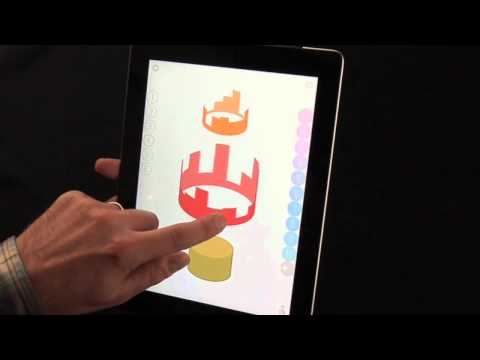 OscilloScoop, a loop-based electronic music jam station for the iPad released this week in the iTunes app store, presents music through an entirely new interface based on years of research: rotating cylinders that one carves to influence pitch, a resonance cut-off filter, and volume.

It’s a deceptively simple instrument, taking seconds to learn and an unknown quantity of time to master (you can hear our first attempt below). The sonic palette is a bit limited, which makes OscilloScoop ($1) more of a limited instrument and fun musical toy than a full-fledged music composition tool, but that’s okay. The music apps world is large and contains multitudes, to borrow from Walt Whitman, and there’s more than enough room for innovative tools like this that lack the range of more full-fledged production tools.

OscilliScoop presents the user with an innovative interface that has its strengths and limitations.

This app represents “the culmination of about 15 years’ effort trying to create musical creation tools that are more like a video game (and find a platform and audience for them),” according to developer Scott Snibbe. “The process began back then at a research lab with my colleague Lukas Girling, and we worked with Brian Eno and Laurie Anderson on some of the concepts.” (Graham McDermott helped develop it as well.)

The app’s rotating cylinders, which can also be toggled to left-to-right sections in landscape mode so that you can alter their attributes outside of real time, allow one to interact with each part of the loop as it happens by choosing notes, the filter setting, and, again, volume, in that order from top to bottom.

You get six pre-filled drum beats to play on top of, selectable on the left, and can store loops on the right for easy access later allowing for the construction of fairly complex songs that you can tweak later in a live setting destructively (meaning that you overwrite the variables for each loop as you change them).

“The carving interfaces advantage is that it turns the experience into real-time music creation, like carving on a potter’s wheel, rather than the finicky composition and noodling of professional audio software like ProTools,” Snibbe told Evolver.fm.

Again, the sonic palette is limited to one synth sound, but there’s lots of fun to be had with OscilloScoop. After about ten minutes of futzing around with it, here’s what we managed to create. If one were to spend more time with the app, one could undoubtably do much better (see video above):

Advanced features include quantizing to 16ths or 32nds of a loop, the ability to control beats-per-minute (60 BPM to 140 BPM), and the option to purchase additional Beat Sets, which costs $2 for all 20 currently-available beats.

Other than that, all you get is a Play button, which is another thing that makes OscilloScoop, a bargain at a dollar, so fun to mess around with, although the extra beats will cost you double should you become addicted.

In our admittedly brief testing period, it was clear that OscilloScoop functions well as a musical toy for amateurs and potentially a more serious instrument for club DJs and electronica producers. To this tester, that price is worth paying; as always, your mileage may vary.

The full set of 20 extra background beats costs $2 as an in-app purchase from iTunes. On the right, you can see where patterns are stored for later activation.

In landscape mode, you can tweak each of the loop's three elements outside of the flow of time.

This is all you need to know to use the program.