Guitars make noise, and computers have ears. That’s pretty much all you have to know to understand the future of music learning.

Like Rock Prodigy, which we encountered at SF Music Tech, Instinct‘s big bet is that people still want to learn how to play guitar, and that they want to do it using technology that listens to what a student is playing. Not only does software have more patience than any human, but it’s way cheaper by the hour.

Earlier this week at a NYC MusicTechnology Meetup, we saw the as-yet-unlaunched Instinct web app, which is slated for launch next Spring, demonstrated by its co-creators Blake Jennelle and Brian Stoner. They say they’re starting with the guitar, and plan to add more instruments in the relatively distant future.

“Instinct is designed to be the easiest way ever to learn an instrument,” explained Jennelle, as co-creator Stoner connected an acoustic guitar to a laptop’s audio input (they say Instinct can also grab audio from a computer’s microphone). “We’re going to show you how someone who’s never played the guitar before would learn how to play the riff from The Rolling Stones’ ‘(I Can’t Get No) Satisfaction’ in… all our testing, in less than ten minutes, which is pretty cool.”

The app runs completely in a web browser using Macromedia Flash (so no iPads allowed). The Instinct interface presents a big guitar fretboard interace, sort of like Guitar Hero, but not really. Notes do appears as colored blobs on the fretboard, and the song is separated into little chunks. If you misplay part of a chunk, it makes you try until you play it correctly twice in a row.

In this demonstration, Stoner only played one note at a time, which would come in more handy for learning how to shred guitar solos than for learning how to play entire songs. However, he and Jennelle claim that it can tease out polyphonic tones as well, meaning that it should be able to pick up chords too.

As things stand now, Instinct only shows you what the (usually) left fret hand does, but they plan to add the (usually) right strumming hand to the interface as well. These are early days for Instinct but they say, it already works pretty well.

“We’ve probably tested it with over 100 people at this point, and everyone gets through a couple of riffs successfully,” said Jannelle. “It might be a little buzzy when they play (due to improperly-placed fingers), and we don’t have enough content in there yet or people using it long enough so that they’re really ‘rockstar’ with it, but yeah, [people are learning with it].”

They plan to add more songs to Instinct before it launches, and hope users will fill out more of the catalog. In the beginning, the app will be free — and that when they start charging “in the distant future,” they plan to experiment with an upside-down pricing model: The more you use it, the less you’ll pay.

9/24 Update: Instinct sent us a video showing how this works: 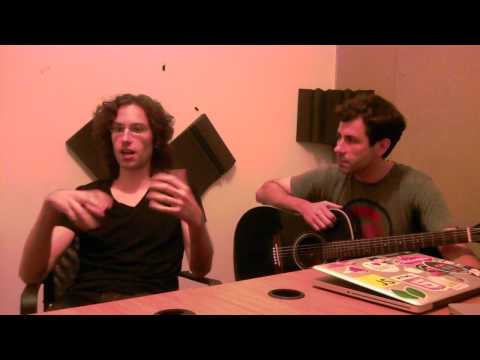