Apple’s iPod scrollwheel was a revelation in human-machine interfaces. The iPhone, iPad, and other smartphone and tablet touchscreens expanded that rotating touch interface to encompass entire screens, so that we can touch them on multiple points, which is great for playing videogames, remixing songs, pinching interfaces, and so on.

The next step could be for the screen to disappear, or perhaps just be augmented by the combination of a projector that splashes an interface onto any available surface, and sensors that determine when you tap or drag spots within the projected area. The benefits for music (and other) apps would be apparent immediately.

Virtual instruments would just be the beginning. For example, you could thumb through a bunch of projected records to browse a music catalog, like being in a virtual record store, or remix tracks by moving loops around on a table.

OmniTouch, a joint project between Microsoft Research and Carnegie Mellon University, currently involves mounting a camera on your shoulder and other wacky elements, but one of its developers told Physorg it can eventually be integrated into handheld devices.

The OmniTouch device includes a short-range depth camera and laser pico-projector and is mounted on a user’s shoulder. But Harrison said the device ultimately could be the size of a deck of cards, or even a matchbox, so that it could fit in a pocket, be easily wearable, or be integrated into future handheld devices.

This is going to be neat: 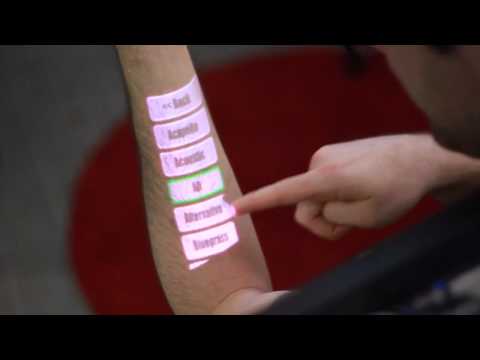